On 1 June 2016,  the Court of Justice of the European Union heard argument in the case of Hemming, the leading case on licensing fees.

The Supreme Court referred the case to the CJEU to consider the legality of charging up-front licence fees at the point of application for a licence.

The claimants, represented by Head of Cornerstone Barristers Philip Kolvin QC, leading Matt Hutchings and instructed by Gosschalks, submitted that the practice is contrary to the Services Directive 2006, transposed into UK law by the Provision of Services Regulations 2009.

At the time the case was originally brought in the High Court, Westminster City Council charged an annual application fee for the renewal of sex shop licences of £29,102. It has since reduced the fee to £3,288, including enforcement costs.

The Advocate General will produce his opinion in July and the judgment is expected later this year. 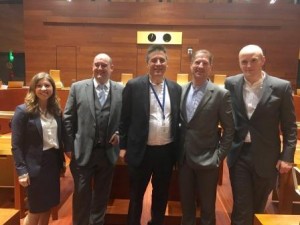 The team in the Court of Justice of the European Union