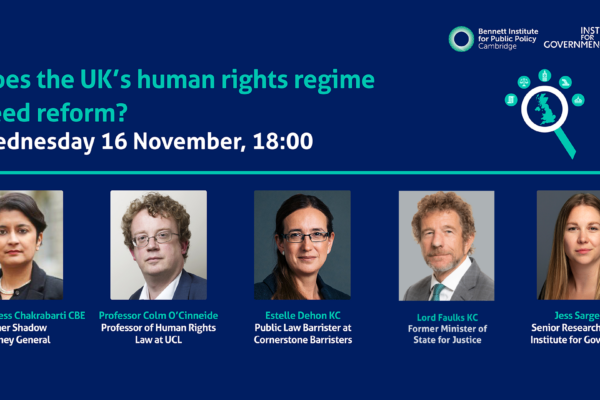 The protection of people’s rights and liberties is a key part of the UK’s constitution, dating all the way back to the twelfth century. In recent years, and with the Covid pandemic seeing unprecedented restrictions on people’s everyday lives, the debate about what rights should be protected – and how – has been reignited.

The government has confirmed that it will bring back the British Bill of Rights, but it is likely to face challenges from politicians of all parties – some of whom think it goes too far, and others who think it does not far enough.

So does the government need to reform how people’s rights are protected in the UK? What questions have been raised about the right to protest after the focus on how the public could show dissent during King Charles III’s accession? And what role should international institutions play in upholding human rights?

This event forms part of the Institute for Government/Bennett Institute for Public Policy, University of Cambridge’s review of the UK constitution.

To discuss this we will be joined by:

This event will be chaired by Jess Sargeant, senior researcher at the Institute for Government.

The event will be live streamed and published on the IfG’s website.

A Q&A will follow the panel with a chance to ask questions.