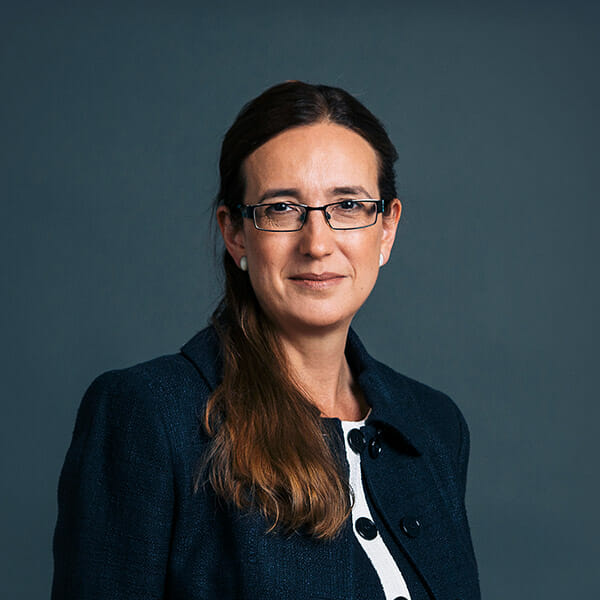 Estelle Dehon KC is a versatile public law barrister with a broad practice, specialising in environment and planning law (with particular expertise in climate change and net zero). The other main area of her work is data protection and access to information, in which she is again recognised as a leading barrister. She also practices in election law and human rights law and is recognised in administrative and public law. Estelle is a member of the Equality and Human Rights Commission’s B Panel of counsel. She took silk in 2022.

Estelle was listed on The Planner’s Women of Influence 2020 (and was also listed in 2018 and 2019). She is a member of the European Commission’s Multistakeholder Expert Group on the GDPR.

She is accredited for Public Access so that she can be instructed by anybody directly, and enquiries about this are welcomed.

Estelle is recognised in Chambers and Partners as a “first-rate” advocate who has “a wonderful manner with clients” and in Legal 500 as “a determined and tenacious advocate, whose oral and written advocacy is nuanced, well-reasoned and highly effective and whose grasp of the law consistently impresses”. Estelle is a versatile public law lawyer practising in a number of areas: environment and planning law (with particular expertise in climate change and net zero); data protection and access to information law; election law and human rights. Estelle is a member of the Equality and Human Rights Commission’s B Panel of counsel.

Experience and Expertise
Estelle has considerable experience as a court and tribunal advocate, as well as representing parties at major planning inquiries and infrastructure examinations. She regularly appears in the High Court and Court of Appeal in judicial review claims and statutory appeals. Estelle has particular experience in climate change-related challenges: she acted in the Supreme Court challenge to the grant of permission for fracking in Lancashire; in the Court of Appeal challenge to the lack of emergency planning at the UK’s first site for fracking horizontal wells; in the High Court defending the Secretary of State’s refusal of an open cast coal mine in Druridge Bay and is acting in the first challenge to the exercise of the Oil and Gas Authority’s regulatory powers. In 2019 she appeared at an inquiry considering permission for “matrix acidisation” (or “acid fracking’s ugly little sibling”) in Ellesmere Port. This year she is representing two community groups opposing expansion at Bristol Airport and Leeds Bradford Airport respectively.

The other main area of Estelle’s practice is data protection and access to information. She advises a wide range of clients, both in the public and private sector, in relation to data protection and access to information matters. She has particular interest and expertise in data protection, big data, profiling, artificial intelligence and machine learning, on which she has been advising insurance companies and tech startups. Estelle also undertakes advocacy work in this area and has experience bringing and defending data breach compensation claims in the County and High Courts. She successfully represented the investigative journalist Stefania Maurizi before the First-tier Tribunal in her FOIA challenge concerning the Met Police’s refusal to provide information concerning WikiLeaks staff, and in 2019 she will be acting for Ms Maurizi before the Upper Tribunal in her FOIA appeal relating to the extradition of Julian Assange.

Estelle regularly speaks at conferences and seminars. This year she co-presented on Climate Change Litigation at Cornerstone’s Annual Planning Day,  addressed the APPG on Energy Costs on Assessing COP26 Outcomes and presented a webinar on Planning and Human Rights for MHCLG.  In 2020 Estelle spoke on Environment and the Rule of Law on 26 June 2020 at the UKELA Annual Conference, she co-presented a webinar on Infrastructure and Net Zero and chaired a seminar on Opportunities for a Climate Positive Economy After COVID-19. In 2019 she gave the Legal Update at the Joint Planning Law Conference</a>; spoke on Veganism and Climate Change at the UKELA  Annual Conference</a>; co-presented  on  Habitats: Past, Present, Future at the Cornerstone Annual Planning Day and spoke on Data Ethics: A Cross-Disciplinary View at the Open Data Institute Annual Summit.